The original Buckshot was planned by Lennard Pretorius and included two routes: the Doubleshot at 585 kms, and the Singleshot at 435 kms. They were intended to be ridden over the Labour Day long weekend. Unfortunately they had to be cancelled in both 2017 and 2018 due to Forest Fire closures and smoke alerts.

Lennard revised the route for 2019, reversing direction, and altering and shortening the route to a single choice of 425 kms. This new route was held successfully on the May long weekend of 2019.

I intended to partake in this offering, but instead chose to spend the long weekend with my daughter and family who travelled from Regina for a visit. So my plan became to go after that weekend. I received no takers on my appeal to join me so I was going solo. Then I thought, if I had intended to do the Doubleshot in both 2017 and 18, and I was going alone, why not do the original route?

That became the plan. I’d looked forward to this for a few years and now I had the chance.

I booked a motel in Kamloops for the Friday and Monday nights with permission to leave my vehicle there for the three days. I drove through rain on Friday and arrived in a drizzly Kamloops. A quick stop at Cycle Logic to purchase a new chain, supper at a nearby bar, and then off to the motel to ready the bike and get some sleep.

Saturday morning arrived with gray and ominous clouds. The first few kilometres were on pavement out through Valleyview, over the Lafarge bridge and out the Shuswap Road. It didn’t start raining until the road turned gravel. 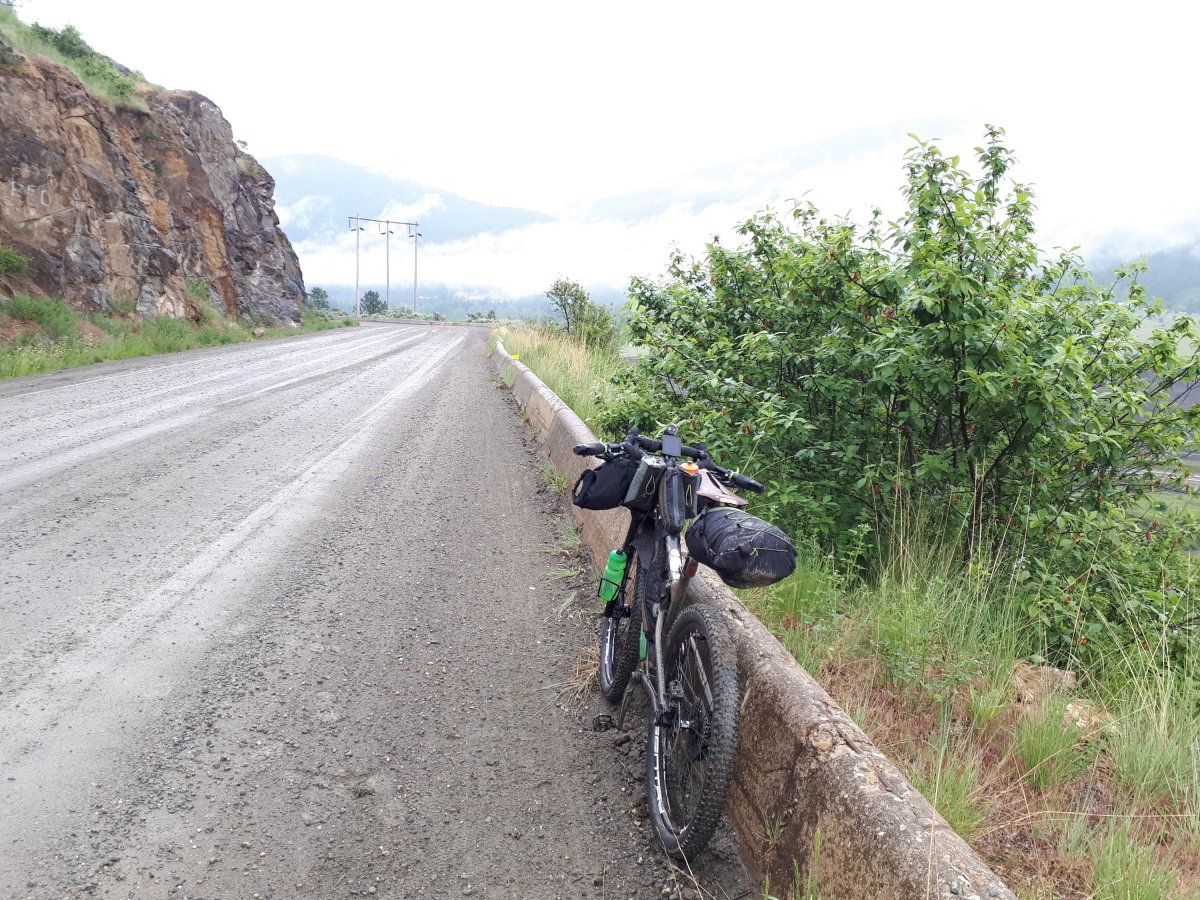 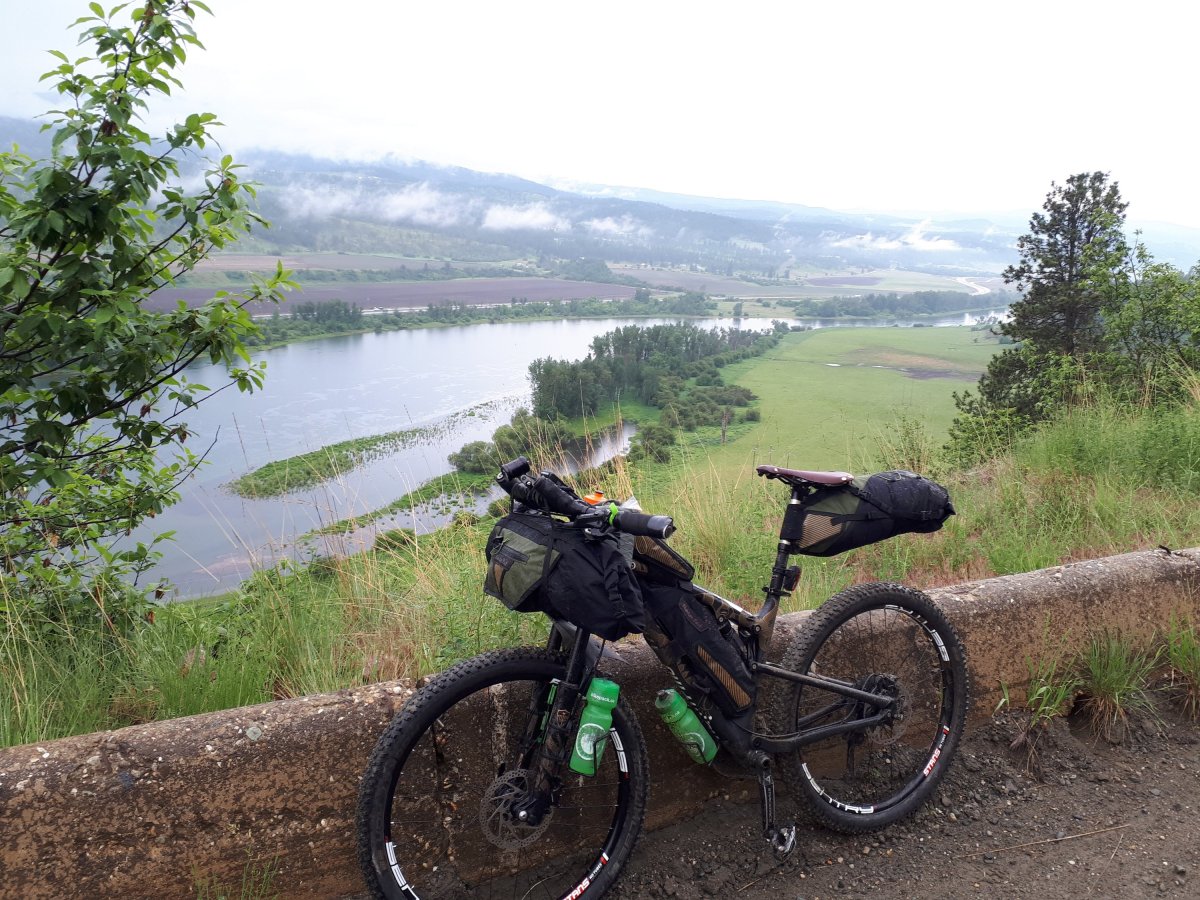 I was comfortable and the road was good so it wasn’t the worst of starts. The route needed to rise above Niskonlith Lake and down through the Provincial Park. In parts this was reduced to a quad trail and then this ominous sign:

Deactivating this one kilometre stretch does not bode well for the future of this route as it is the only way above the lake. A future route will have to stay on the Kamloops/Shuswap Road and then climb up the Loakin Bear Creek Road.

I made it through there and descended to the park. Here the rain picked up and the mud started.

The Loakin Bear road meandered along and eventually dumped me onto the paved Holding Road up to the community of Adam’s Lake. The small store was open so I grabbed a sit down mirowaved lunch on a bench outside. The rain let up for a bit so I was able to dry off my gear. The next resupply would not come until I reached Barriere.

The next section was on the Adam’s Lake FSR which had more traffic and some logging trucks. It also started to rain again and the surface became slick. On some of the hills I even managed to over-power my 2.6″ Rocket Ron’s and spin- out. On one of these hills I pulled over for a car approaching from behind. A Jetta with a Thule carrier and covered in decals came to a stop. The young driver asked me where I was off to which I explained. He informed me he was also a bikepacker and intending to do the Alberta Rockies 700 in August. I said it was also in my plans and maybe we’d see each other there. (That turned out not to be the case). He then asked where I was planning on going this afternoon and I explained I was hoping to get to Clearwater or at least to Dunn Lake where there was a Rec Site. He said he was off to a cabin they owned one km past the Rec Site and invited me to stay there. I thanked him for the offer and off he drove. 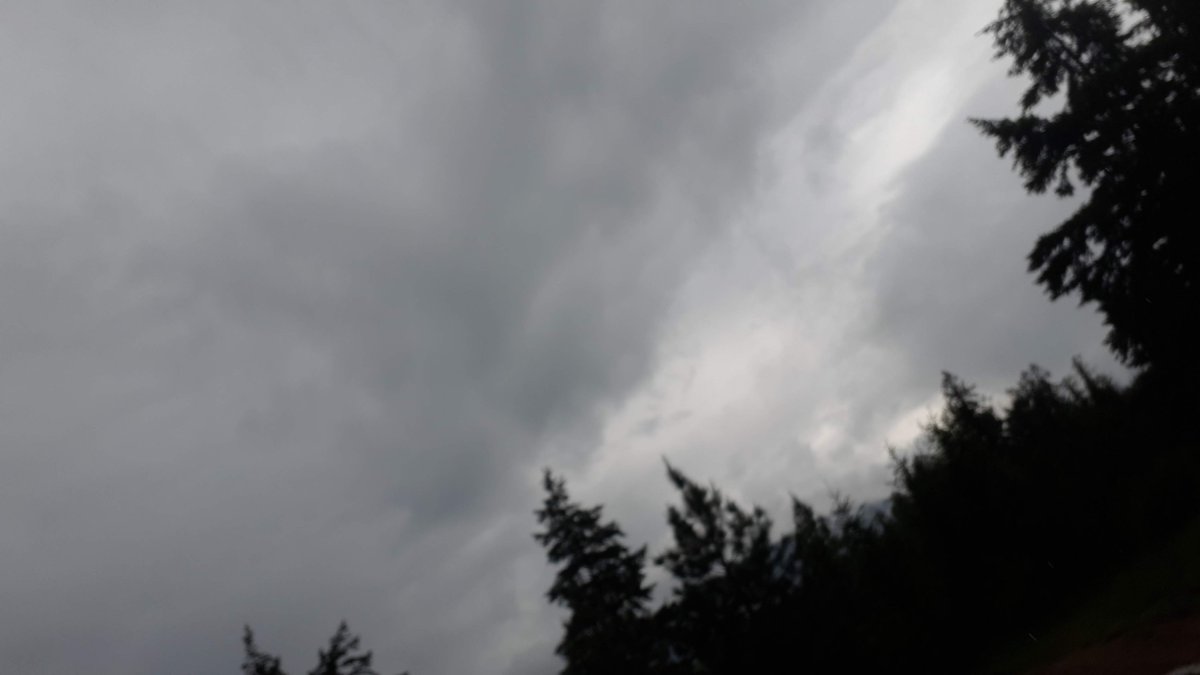 The rain and mud continued and and made the riding a little hairier than I would have preferred. I had to pay much closer attention to staying upright on the long descent down to Agate Bay. When I reached the paved Agate Bay Rd to Barriere, I had a decision to make. I could take the shorter paved route or carry on the Adams FSR and up over Johnson Lake. Looking for an excuse, I found one. I reasoned if my tires were slipping on the relatively mellow climbs on this road, what would it be like on a steeper, probably muddier road? I could imagine my tires being encrusted and having to push with my shoes loaded with extra pounds of mud. Not really a hard decision at the time, looking at this part of the route: 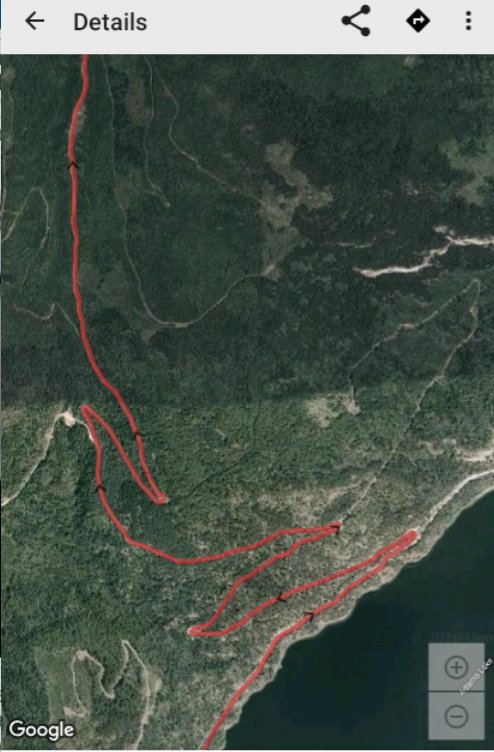 So with a little guilt, it was a fairly easy section to Barriere. This is a pretty road, without much traffic and only about ten kms unpaved. I’ve ridden and driven this part of the route before as part of an off-highway East-West corridor. After I came down the big hill to Highway #5 I only had a few kms to Barriere. This was indeed fortunate as I no sooner pulled out on it, when the skies literally opened with a torrential downpour. My need to eat and resupply became immediately secondary to finding a roof. I found one at the entrance to town under the canopy covering the pumps at a service station. The rain was so intense and sudden, the grounds were over-run and they had to, temporarily at least, cordon off the pumps as they were inundated with a foot of water. I waited with a group of motor-cyclists while the rain dissipated, which it did.

Unsatisfied with convenience store offerings, I decided to seek out a restaurant where I could have a sit-down meal and continue to dry things off. I found a quiet family restaurant and had a great meal. As I headed North out of town, I passed a Search and Rescue station where a pair of guys were hosing off a vehicle. I took the opportunity to ask if they could give my drive-train and wheels a spray. They were happy to help, and my drivetrain was happy to be clean. A little lube and I was off up the Dunn Lake FSR.

This section up to Clearwater and beyond was all new to me. I had never been up the East side of the Thompson River. With the rain abated and new views to enjoy, I was a happy camper. This section didn’t disappoint. Very picturesque views of the river and farmland. I don’t know why I took no pictures of it.

When I reached Dunn Lake there were still hours of daylight left. I passed the Rec Site and moved on to where I thought the offered cabin might be. I saw it nestled by a creek, the Jetta outside, and smoke rising from the chimney. Hadn’t he mentioned a hot-tub? Very tempting, but there was a fairly good climb between it and Clearwater and another massive one on the other side. Better to get through one of them tonight and only face one tomorrow. So off I went.

It was still light when I reached Clearwater. My research hadn’t really nailed a good camping spot near the route, assuming there would be plenty. I didn’t pass any as the route wound through the residential area and crossed Highway #5. I rode up the highway off-route and did not find much. I spotted a modest motel and decided to give it a try. It proved affordable, so I took the opportunity of luxury to clean and dry myself and my gear. 200 soggy kms. 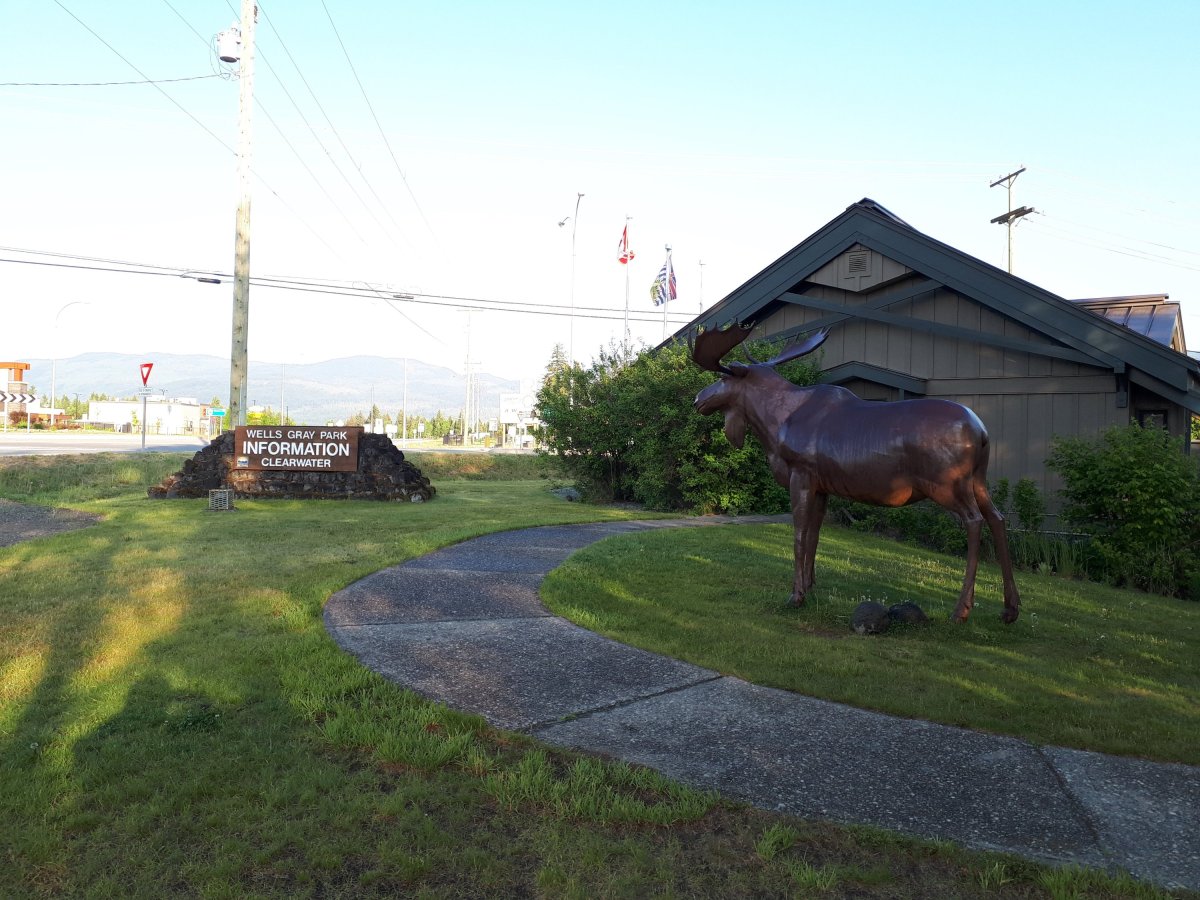 Nice place, Clearwater. Too bad I was passing through so quickly. Past pretty Dutch Lake and over the Thompson River and up Camp 2 FSR. A very robust climb, I have to say. About an unrelenting 1100m in about 11 kms. Views and a good sleep made it tolerable. Only traffic on a Sunday morning was a caravan of tree-planters, and one guy out collecting cedar boughs. He had music blaring and expressed concerns for bears and grizzlies in the area. Fortunately, I saw none, but felt for the reassuring touch of my bearspray a few times.

Once up top the route was a lot more fun with lakes, pretty Rec Sites, and some pleasant, little-used roads.

Star Lake, Coldscaur Lake, and Boundary Lake being some of the nicest. Bowers Lake Road was almost unused, but luckily there were no trees across it or other barriers as I rolled past Pat Lake.

Soon, the route joined Mahood Lake Rd. and names became a little more familiar as I entered the South Cariboo. This area is a Lakes District and they are frequent. Hathaway, Sulphurus, and Horse Lakes are some of the largest the route passes here. The route skirts Lone Butte and then heads South down to Green Lake. I pulled into Emereald Bay campsite at Green Lake with lots of daylight left. Actually even enough to get a bit bored after setting up my tarp and bivy tucked among the RVs. A cold dinner and early to bed. Only 139kms today, but lots of climbing on tired legs. A good day with no rain.

Today would be an interesting one, with the route passing through some more areas I’ve heard of but not seen. It follows the North Bonaparte Rd for quite a ways. Some of it is quite populated with Recreational homes and farms as through Pressy Lake. It also passes through the Northern reaches of the imfamous Elephant Hill fire that prevented this ride as an event the last two Falls. 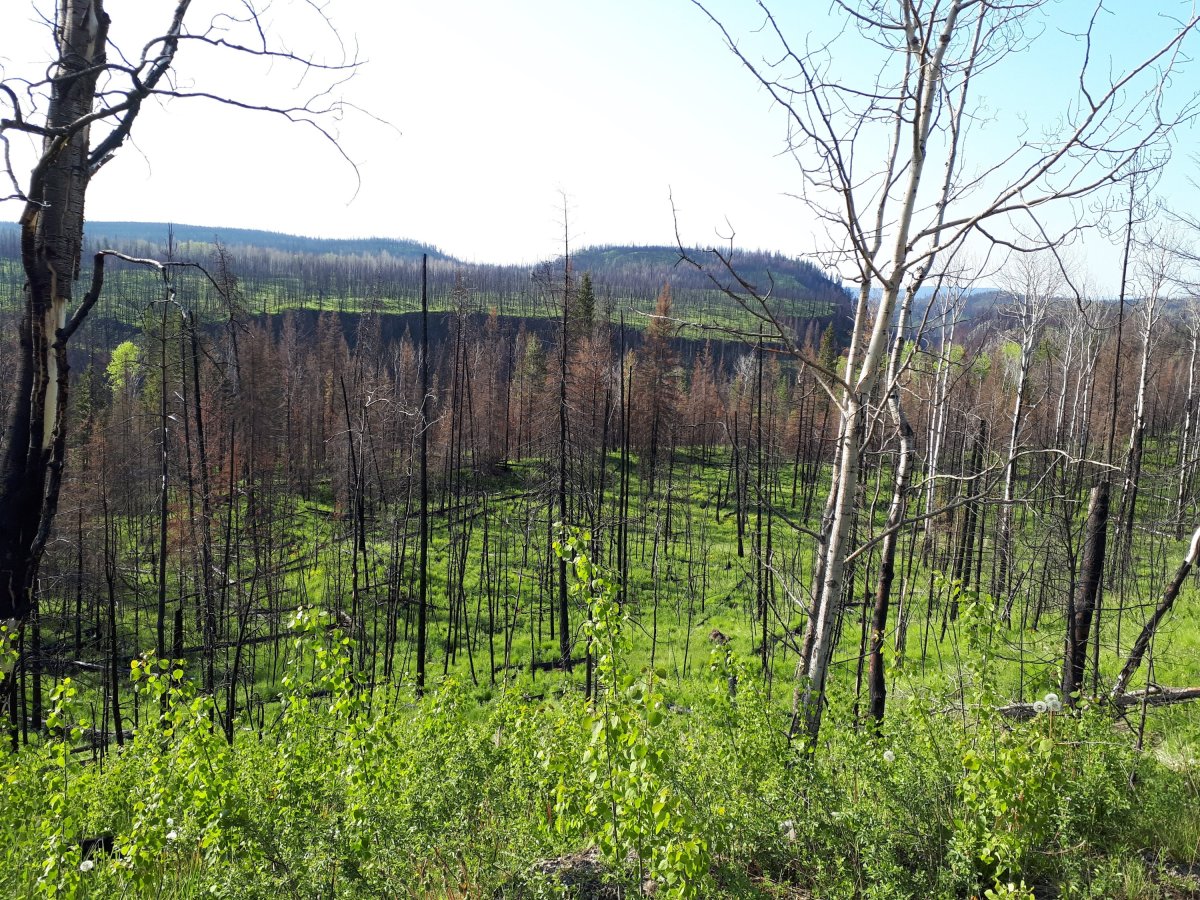 Amazingly, the underbrush seems to be greening up quickly, but I imagine the trees will take some time. I passed quite a number of tree-planting vehicles and a couple of camps along here.

After passing the Northern tip of Bonaparte Lake the route swings Southwest again and starts down to the Deadman river. It was worth the slight detour at a hidden trail to take in the Deadman Falls.

The route continues down the Deaman. Lots of pretty Rec Sites along here. Probably a nice place to come to on hot summer days. A little farther down it passes some Hoodoos.

Just about dinner time I came to the Trans-Canada Hwy #1 and then the small town of Savona. I wanted to get some dinner and decide what I would do for the next section up over past Tunkwa Lake. A modest meal at the only restaurant, service station and general store gave me time to plan. I had not been able to get any information on the state of the OHV (Off-highway vehicles) trails the route was to use to get to the Lac La Juene road. As it was early in the season and at fairly high elevation, I wasn’t confident that these trails would be passable. This route had not been ridden by anyone I knew, so I had doubts. If not doable, the only way around was to bypass South through Logan Lake with greatly added distance. Regardless, this would require a night out at elevation and not reaching Kamloops until the next day. I had already verred from the route at Agate Bay on Adam’s Lake, so staying true to the route was already lost. With those thoughts, I took a route I normally wouldn’t prefer. I rode Highway #1 the last 40 kms to Kamloops. The decision felt fine as I showered and climbed into bed at the motel from which I had started. A long but a good day.

This is a text widget, which allows you to add text or HTML to your sidebar. You can use them to display text, links, images, HTML, or a combination of these. Edit them in the Widget section of the Customizer.